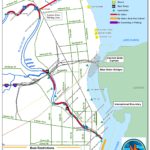 Memorial Day is almost here, unofficially kicking off the boating season in Michigan.  Boaters, this season especially, are being asked to be extremely mindful of the no wake zones on the waterways of St. Clair County.  “The high water levels have the potential to cause a lot of damage to property, if boaters aren’t following the rules,” said St. Clair County Sheriff Tim Donnellon. “Our Marine Patrol Deputies will be strictly enforcing the no-wake laws throughout the county.”  According to the U.S. Army Corps of engineers, water levels on Lake Huron are expected to be the highest since 1986 and near record levels. The St. Clair River is currently near flooding levels, especially in southern St. Clair County. Other rivers in St. Clair County are also experiencing much higher than normal levels.  No wake zone maps for both the Port Huron area and southern St. Clair County are attached to this news story.  Anyone who would like a PDF copy of the maps can e-mail Deputy Steve Campau at scampau@stclaircounty.org.