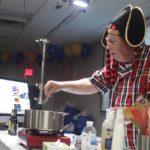 Guy Klinzing, celebrity chef, actor and entertainer will be at Landmark Academy at 4864 Lapeer Road in Kimball tonight, for  the 2018  Let‘s Get Cooking Show”.   Guy says in the nine years he worked for Taste Of Home, he performed over 250 shows, so he is familiar with what the audience enjoys.  He says he has taken the best of what Taste of Home had to offer, and added his own flair along with his own recipes.   The show is being presented by WGRT and the Times Herald, and sponsored by McLaren Port Huron.  Attendees will have the chance to win dozens of prizes throughout the show – McMillin’s Furniture in Yale is giving away a genuine La-Z-boy recliner and Miller Maytag will give the grand prize of a 30 inch double oven range!  There is a free vendor show prior to the cooking show, which begins at 4:30 p.m. – doors open to the auditorium at 6:30 with the cooking show beginning at 7:00. General admission tickets are available at the doors.  If you have questions call 810-987-3200.