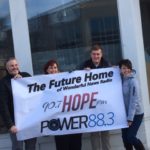 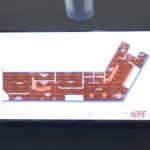 A local Christian radio station will be moving from its long-time location of Ross Bible Church in Port Huron Township into a vacant storefront in downtown Port Huron.  Station Manager Brian Smith said the move for 90.7 Hope FM and Power 88.3, has been on their minds for some time, and they have found their new home at 908 Military Street.  The purchase is expected to be complete this week.  Smith told WGRT that over the years the radio stations have been involved in the local community through concerts, events and bringing business downtown, and they feel having a physical presence in the community they serve, will be beneficial for all.  The new location between Cedar Hill Graphics and the Exquisite Corpse Coffee House.was revealed on Friday of last week at an event during which, Smith, along with State Representative Shane Hernandez, who serves on the project’s advisory team and also works at the local firm SyDesign unveiled drawings that included the station’s studios in front of the main window, with office space on the second floor.  “There’s already great media downtown, and this will be another major media in the area” according to Smith.  He said they would like to move in this summer.