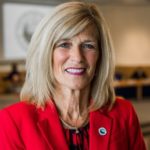 Election day is Tuesday, November 6 and voters will head to the polls to decide on a number of positions.  Locally, in the city of Port Huron three seats for city council need to be filled and the position of Mayor is up for grabs.  Four candidates are running to hold the title of Mayor; those include current , current city councilman Scott Richard Worden, Garth Gurnsey who has run for Mayor in the past, newcomer, Tray Smith and current Mayor Pauline Repp who has served in that position for nine years.  Repp says she feels she is a good fit for mayor, has she has nine years experience, and prior to that, she worked for the city 25 years 20 of those years as city clerk.  Repp says she feels the city has made great strides in becoming more viable, and wants to continue to be part of that momentum.  Port Huron means a great deal to her she told WGRT, and along with the council’s list of goals, she would hope for the citizens of Port Huron to become more involved and more optimistic about the city.