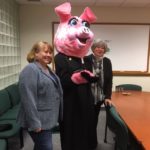 Wednesday afternoon St. Clair County 4H Fair President Rob Usakowski announced a project that is partnering the fair with Michigan State University Extension and Mid City Nutrition.  The project is entitled “Pig With A Purpose”.   The pigs will be raised with the intention of raising money for Mid City’s soup kitchen, and raise awareness about the need for a soup kitchen in the community.  The fair board is purchasing two pigs from Thueme Hog Farm, one of which will be auctioned off at fair with money raised going directly to Mid City, according to 4 H Fair program coordinator Jacqui Rabine.  Rabine said she started with a small idea and it mushroomed into a large project involving a number of people as well as businesses.   The intention is that one pig will be auctioned, with both pigs processed and their meat donated to the soup kitchen.  Susan Bennett, Executive Director of Mid City stated more than 70,000 meals were served in 2018, and they are grateful for the involvement of 4H and hopes for their partnership to grow in the future.   Mid City Nutrtion will be opening a new building in the fall with a teaching kitchens and she would like to see 4 H members there cooking and have MSU Extension  provide storage, canning and serving knowledge to Mid City.  A mascot and spokesperson for the fundraising is “Penny” who has her own Facebook presence and will be making appearances in events leading up to the fair.  Penny (a 4 H member dressed in a pig suit) will educate the public on soup kitchens and food banks, as well as give facts about pork and bacon.  The St. Clair County 4 H and Youth Fair set a record attendance last year of just under 112,000 attendees.  The 2019 Fair will be held at Goodells County Park July 15 to the 20th.  Anyone interested in bidding on the pigs at the livestock auction can contact the fair office at (810) 364-9100.  Check out on Facebook https://www.facebook.com/StClairCounty4HFair/videos/456722668196235/