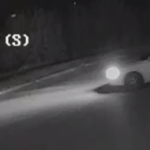 Detectives from the St. Clair County Sheriff’s Office are asking for the public’s help in locating a vehicle believed to be involved in a pair of incidents in Brockway Township.  The suspect vehicle is believed to be an early 2000’s model white Pontiac Grand Am four door, which appears to be in good condition.  The vehicle was being driven by suspects in the attempted break-in of an ATM machine at the Tri-County Bank in Brockway Township and the attempted break-in of the Countryside Market located at M-136 and M-19 in Brockway Township.  The suspects damaged the ATM machine at the bank, but were unable to access the safe.  At the store, the suspects smashed the front window, but it appears they did not take anything.  Both incidents occurred in the early morning hours of May 18th.  If anyone has information regarding the vehicle in the pictures, please contact Detective Steve Rickert at (810)-987-1731.