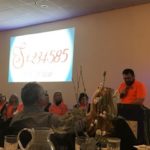 United Way of St. Clair County’s (UWSCC) 2018 Campaign Celebration last night was a night of inspirational and heart-warming testimonies.  The room was filled with eager guests excited to hear about this year’s accomplishments.  Campaign sponsors made this event possible.  Alexander’s Premier Banquet Facility, 1200 Gratiot Boulevard in Marysville, hosted the event of 150 guests.  Mayor Dan Damman, Campaign Chair, was the Emcee for the evening.  His passion for UWSCC entranced the guests from the moment he began his welcome.  Mayor Damman kicked off the event with an expression of gratitude to all of this year’s volunteers, supporters, and Campaign sponsors.  Loaned Executives, Crystal Mosher and Bryce Smith, were recognized and thanked for their exceptional efforts conducting Campaign meetings with employers and their staff.  Campaign Division Chairs each presented on the successes of their teams of volunteers and shared moving testimonials of their experiences.  Plaques were awarded to many of the businesses and organizations who participated in an Employee Giving Campaign; in recognition of the generous support of their staff.  New contributors received certificates of appreciation.  The room was filled with laughter and applause when the Campaign Cabinet played a light-hearted joke on their Chair; showing, once again, their loyalty to him as their fearless leader.  Then, the moment had come; it was time for the unveiling of the 2018 Campaign Total.  UWSCC is pleased to announce that the community raised $1,234,585.  That is 97.8% of our goal reached!  Campaign Director, Brent Gillette, presented Mayor Damman with a token of appreciation on behalf of all of the volunteers whom he has led with passion, dedication, and determination.  U.S. Congressman Mitchell and a representative from the office of U.S. Senator Peters presented Dan with a certificate of recognition for his compassion and perseverance that are helping to improve the quality of life of the citizens of St. Clair County.